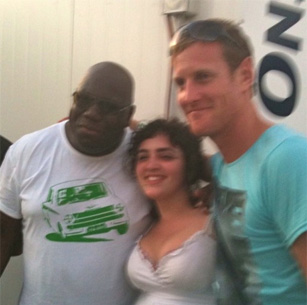 I recently wrote a song with world renown DJ Carl Cox. The track, ‘Chemistry’ was just released as the second single from his latest album, ‘All Roads Lead to the Dancefloor.’ The album itself is a groundbreaking development. It has been released via USB and provides the customer with several waves of releases, live footage, extra content and DJ tips and tricks videos that will be updated for the next 12 months. The single, which Carl said is his favourite from the album, was released as part of set of 3 tracks, including the single and two killer re-mixes by Nicole Moudaber and Reso.

You can access the track and the re-mixes from beatport here.

The Nicole Moudaber re-mix has been sitting at #1 on the beatport techno charts for the last two weeks, which has been very exciting.

Here are some online reviews/press of the album

I have thoroughly enjoyed the experience of working with Carl and his team, the highlight was performing last year at Stereosonic festival in Melbourne (pictured)

I hope to have the opportunity again.

About the Author: admin