During 2013 and 2014 I had been running an international song competition with UK activist group, One Law For All.

The competition, ‘Sounds Of Freedom’ called for entrants to submit original material related to the work ‘One Law for All’ is engaged with, discussing themes like religion, freedom, secularism, Sharia law, equal rights & religious arbitration.

“Change comes about by breaking taboos and pushing aside that which is deemed sacred and art is such an important way of doing this” –Maryam Namazie, Spokesperson of One Law for All

As the co-ordinater of the ‘Sounds Of Freedom’ International song competition I am proud  to present the winners to the wider public.

SIMPONI with their moving entry, ‘Sister in Danger.’

SIMPONI are a pop-rock band from Indonesia, formed in 2010. Since their inception, SIMPONI have been musical activists, campaigning for human rights. Combining music with interactive discussion called the ‘musical discussion tour’ in the last four years SIMPONI have reached over 22,000 students discussing issues such as violence against women and children, corruption and climate change.

At last years historic Secular Conference in London, Simponi were announced as the winners of the competition. Speaking on their wining entry, ‘Sister In Danger’, a tribute to Indonesian victims of sexual violence they write:

“There are 35 victims every day in Indonesia. This is crazy. Women, girls and children are living in danger and insecurity in my country. We are questioning the existence of the laws, the government, the religions, the constitution, the culture, and the educational system.

It is very important for Sister in Danger to ‘go International’ because the violence against women is very high in Indonesia. And one of the reasons is Sharia law.

Thank you very much One Law for All who organized the Sounds of Freedom competition. We are so proud and so happy to be the winner of the competition. It’s a great honor for us. We dedicate the win to all the victims and survivors of sexual violence in Indonesia and in the world. We would also like to thank our family, friends, fans and colleagues who always support and teach us from the beginning.

Stop the violence in the name of religion, injustice laws, business, culture and tradition!”

Below are some videos of the Sounds Of Freedom presentation at the Secular Conference last year: 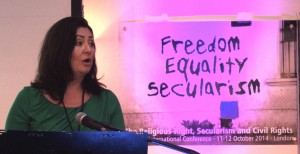